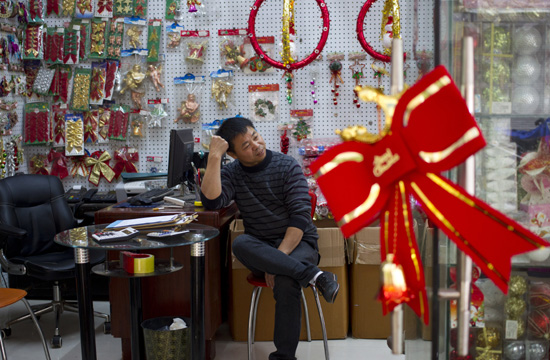 With 200 exhibitors, the four day event played host some of the world’s leading manufacturers of machinery and ancillary equipment for the sock and hosiery industries as well as representatives from the circular and warp knitting sectors.

Eastern Chinese city Yiwu is known for its small commodities market, which attractedsome 440,000 oversea buyers last year. It has contributed to a substantial part ofChina’s rising export over the past decade. However, the fast expanding internetbusiness trend, has raised questions on how this wholesale market will adapt.

Chen Shufang has been selling toys in Yiwu market for 20 years, 90% of her productsare sold abroad. Her shop is located in one of the prime locations, but she finds fewerclients are visiting the shop this year.

Chen said, “Maybe it’s because of the financial crisis, the number of foreigners herehas decreased, so has my orders. Usually, our business is thriving in autumn.”

Talking about the explosion of internet businesses, she says she prefers makingphysical sales.

The show is going into countdown period, it is expected that renowned exhibitors from 10 countries and regions, including Germany, HK, Italy, Korea, PR China, Sweden, Switzerland, Taiwan, Turkey, U.K, etc. will gather at 7,600 sqm exhibiting area.

In recent years, knitting related equipment has been developing towards the directions of energy saving, efficient and shorter logistics process. Although the overall economic development of knitting industry is slowing down, some enterprises have obtained satisfactory result through R & D on equipment.

In global apparel market, there is rising demand for seamless underwear and it becomes a potential growing and fast emerging sector because of its comfortability.

Stepping into the 13th editions, YIWU H&G continues addressing industry’s needs and development. This year, visitors can learn new technology from the latest machinery and equipment from near 200 local and overseas exhibitors.

Since its debut in 2000, YIWU H&G, China’s authoritative exhibition on knitting machinery, has gained strong support and appreciation from industry players. It has been rewarded as one of the top ten exhibitions in Zhejiang Province in 2007 & 2009, which becomes a “must-visit” exhibition every year.

At a college in Zhejiang province, students are encouraged to worry more about starting a business than studying the theory of doing so. Han Bingbin reports in Yiwu, Zhejiang.

But just six years ago, he was a poor freshman who picked up empty bottles on campus to sell and cover his living expenses.

In 2007, on the suggestion of a friend, he opened his first online shop on Taobao, selling home accessories and cosmetics.

Taking advantage of Yiwu’s booming manufacturing base, his business quickly became successful. By 2008, a year before he graduated, he was already making more than 30,000 yuan a month.

About that time, he moved into a rented apartment where he started hiring employees to help with his growing business. Living off-campus was against school rules at the time, so Yang had to keep his plans under wraps.

What he didn’t know was that Jia Shaohua, vice-president of the vocational college, was also fermenting his own ideas.

At the time, attendance at classes was low and Jia, whose daughter is a Tsinghua University graduate, was organizing self-study classes and arranging roll calls to improve this situation – but with little success.

Jia then tried another tack, by encouraging his students to start their own businesses. It was at this point that he heard about Yang’s success and in response decided to found a so-called enterprise school to “copy and paste Yang’s model on a large scale”.

At a meeting with Jia, Yang (an underachiever at high school) was called a “hero” for the first time. His name soon appeared in public speeches and enrollment advertisements.

His example inspired Zhang Luoluo and some other 100 youngsters to become the first students of the college’s enterprise school in 2009. Some of them abandoned the chance to enter a higher-level college.

Zhang, from Henan province, started his college life by opening a shop on Taobao and in the following three years, “earning more money” was his principle motivation.

When his high school buddies spent their parents’ money traveling, he was in front of the computer eight hours a day taking care of his online knitwear business. Very soon the then 21-year-old learned to bargain with wholesalers and deal with after-service issues.

In his sophomore year he was making about 4,000 yuan a month, which is when he moved off campus and rented a suburban apartment, where he hired two employees to turn a roomful of stockings and scarves into money.

Making “business top priority”, the school has introduced delivery companies to students, and they are allowed to take orders in class.

Meanwhile, general education courses such as advanced mathematics have been eliminated from the curriculum; while photography, shop design and taxation have been encouraged because they serve the needs of the students, says Zhu Huabing, dean of the enterprise school.

Students are even allowed to skip classes as long as they do well in their business and pass their final tests, Zhang says.

But business performance appears to be more important than final examinations to many students.

Zhang’s classmate Shi Haojie failed six courses this year – which generally leads to a student being expelled – but instead he graduated as an outstanding student.

The reason is he owns three factories with annual sales of more than 10 million yuan. As such, Shi is a model student.

“Failing the tests doesn’t mean he hasn’t mastered the skills. Take the marketing course, for example. Being so successful in his business, Shi clearly doesn’t have any problems with marketing,” Zhu says.

Even so, to counter those who say studying textbooks is useless, professor Yang Jianhua at the Zhejiang Academy of Social Sciences, was reported as telling provincial media that accumulation of knowledge is useful for social development. Thus, he argued, in addition to practical business training, there is still a crucial need for “humane education”.

He said he was saddened by the fact that both are confused with the “goal of education”, which he said was “to guide and inspire students to find what they need”.

But for vocational college vice-president Jia, his goal has never been so clear. So-called humane education sounds good, he says, but it’s not always feasible. Calling his students “losers in the examination-oriented education system”, he believes practical training is a more apt choice for these young people.

“The fundamental need is to help them survive rather than encourage them to pursue so-called higher-level ideals,” says Jia.

So far, more than 1,800 students at the college, including those at enterprise school, have started their own e-businesses, creating annual revenues of more than 28 million yuan and providing more than 1,000 jobs.

More than 80 of these students have an annual income of more than 100,000 yuan. Zhang Luoluo is one of them. During the busiest period, his knitwear shop on Taobao makes more than 30,000 yuan a month.

Full of gratitude to the college, he plans to own factories, buy a car and then an apartment.

Even so, there are some regrets. Back in high school, he used to picture his college life as a mixture of simple courses, club activities, group trips and a splash of romance. But during his three strenuous years, none of this actually happened.

“I was so busy, there were many things I didn’t have time to do before I graduated,” he says.

“For example, I only went to the library once and I didn’t even have time to sit down before I had to rush off and do something else.”