Yiwu, a city in Zhejiang province well-known for its small commodity trade, plans to become an international special trade zone.

It’s claimed, for instance, that six out of 10 Christmas trees sold in the United States come from Yiwu. 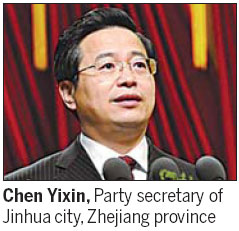 But Chen Yixin, the Party secretary of the city of Jinhua, which administers Yiwu, said he wants to build its imports, as well as its already-strong exports.

“We are mulling a plan to build Yiwu into an international special trade zone.

“We’ll submit the plan to the central government for approval,” Chen told China Daily, on the sidelines of the 18th National Congress of the Communist Party of China.

He said he believes now is the perfect time for the central government to widen its reforms in some specific areas, and Yiwu would offer the perfect location.

“We have some comprehensive economic zones such as Shenzhen in Guangdong, Pudong inShanghai and Binhai in Tianjin, and we need reforms to go further afield,” Chen added.

Despite China’s export growth slowing this year due to the sluggish global economy and the euro zone debt crisis, Yiwu saw its exports jump 59.1 percent in the first nine months to $4.19 billion.

“We expect our export growth to exceed 80 percent year-on-year this year,” Chen added.

Zhejiang Governor Xia Baolong said at a discussion session during the congress that the province is struggling to achieve an import and export growth rate of 10 percent this year.

China’s exports had been declining since late last year, but have picked up in recent months. Exports in October rose by 11.6 percent from a year earlier, compared to the 9.9 percent year-on-year increase registered in September, according to the General Administration of Customs.

Yiwu’s impressive export performance, Chen explained, is attributed to a number of measures taken to improve services for customers.

While consolidating its business in traditional export markets, the city has also been successful in expanding into emerging markets, such as Latin America, Africa and Eastern Europe, he said

By the end of September, the number of foreign trade companies registered in Yiwu reached 4,658, up 29.4 percent year-on-year.

While plans for the pilot zone are expected to give a significant boost to exports, Chen said he hopes imports will also rise significantly as a result.

“We used to be considered a good export platform for all types of commodities from China. Now we could be used to bring overseas products back into China too,” he said.